So, last Friday (the 6th of July) saw me heading down towards The Big Smoke (I.e. That London) for two reasons - firstly, to catch up with an old friend and secondly, to attend the London Film and Comic Con 2012 with the Sci-fi costuming group The Galactic Knights.

For those not in the know, and this was my first one, LFCC is an annual convention of science fiction and fantasy featuring a number of celebrities from cinema and television either taking part in panels, signing autographs or posing for photographs.

This was going to be an interesting troop with the GK for two reasons (not forgetting the usual fun of doing them in that I get to meet loads of good friends again). One reason was that Karl Urban was here to promote the new Dredd movie, and secondly that I finally got to troop with another Judge - the first time I'd got to do that since SFX earlier in the year. John Burdis is the creator of the excellent Cellar of Dredd blog, and one of the biggest Dredd and 2000ad fans I've ever had the pleasure to meet.

In hindsight, I might well have enjoyed the reunion with my friend a little too much on the Friday night which meant that the (way too) early hours Saturday morning saw me hungover and having to trek across half of Londons tube network with the three bags/suitcases that form my Judge outfit.

By the time I'd arrived at Olympia my head had cleared somewhat. Crowds were starting to gather outside in large numbers even at this early hour, but I made my way in with some other people hauling costumes and found my way to the Galactic Knights prop table. There I met the GK, and then John for the first time. I found a relatively quiet stairwell to get changed in - John was already kitted up - and then we were ready.

John had the right idea in that we should get our tickets for photographs with Karl and for the Dredd panel before the masses outside flooded in and within an hour or so it became quickly apparent that that was indeed the wise choice - within a short period of time the queues were incredibly long, and we wouldn't have stood a chance.

Judge Burdis and I spent most of the morning and early afternoon wandering about.  At no other GK event have I been stopped for photographs quiet so many times - it seemed everybody wanted a picture of the Judges and most of them were quite happy to pose for an action shot in which it looked like we were beating them up.

Early afternoon saw us amongst the first in the queue for the Karl Urban photo session - there wasn't much time to dawdle because as per most of the photo sessions, they were a virtual production line. Your number is called, you stand alongside the celebrity, the photograph is taken and you're moved on. John went first still wearing his helmet and got an excellent shot of him pointing his lawgiver at Urban. I opted to take my helmet off, had the photograph taken and as I thanked him he replied with "Awesome costume, mate". Good times :)

The hall was absolutely boiling. It was now becoming full of people, and John and I were looking for any excuse to alternate our patrol between inside and outside with the queues where at least we could get some air - and a good job we happened to find ourselves outside the front door at the right time..

Because of the mighty Burdis and his fame within the 2000ad inner sanctum and a conversation he happened to be having outside, some of the Dredd PR people saw us in costumes and asked if we'd be willing to help out at the Dredd panel later on that evening. It took a mere seven hundredths of a second for us to answer - naturally, Yes.

More patrolling and more beating up of perps saw early evening and the time of the panel gradually approach - until we found ourselves at the entrance to the panel watching over the crowds. People were ushered inside and we were told where we needed to stand - John to the left of the panel and me to the right. There would be a Q&A with the writer Alex Garland, Karl Urban and the Dredd artist Jock and then an exclusive clip of the Dredd film would be shown.

But we'd been instructed to stand in place during the duration and that we weren't allowed to turn around and watch the clip. Arrrggggghhhhh!

The transcription of the Q&A with the panel is all over the internet, but the audience were informed that any recordings of the exclusive clip would not be allowed. And I had to stand perfectly still whilst the film played slightly over my left shoulder, with Karl Urban standing right in front of me having launched himself from the panel to see the clip that even HE hadn't seen yet.

By then the room was getting incredibly warm. The sweat was building, and my visor had misted over completely. If anything, I was just waiting for the competition section at the end of the panel to finish - and then blessed relief, the crowds cleared down and I could remove the helmet and breathe again!

The end of the day was approaching so we took the opportunity for a few more photographs and then it was time to dekit for the day. I'll intended that this would be it and that I'd pop by for my kit the next day and get the train back.

A board game evening in the Pembury Tavern in Hackney followed, with slightly less beer than I'd imbibed on the Friday - tiredness was taking its toll and I was struggling to stay awake. A good sleep and a big breakfast courtesy of the Ceasar Grill in Snaresbrook and it was back on the tube to Olympia.

There was a brief moment of confusion in that the people at the door didn't want to let me back in, but after a quick call to John to confirm who I was, I was back in.

The suit was calling out to me, so I decided to kit up for a few hours. More of the usual - lots of photographs - and then it was time to get changed back into my normal clothes for the journey home - and then normality is suddenly restored. 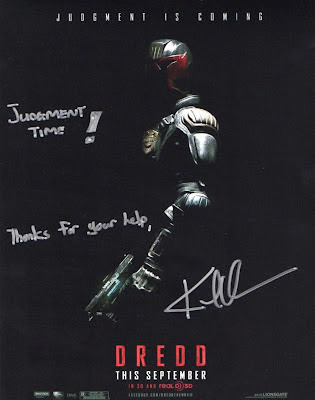 Judge Burdis, however, performed way and above the call of duty (and hadn't been as short sighted as me in getting an off-peak ticket meaning I had to be on a train before 16:45) and did the second days panel shoot. He got to see the clip - the lucky bugger - and also got hold of a signed poster for himself and also one for me (signed by the esteemed Mr. Urban) for our help in judging the event.

All in all though, a tiring but absolutely awesome event. The standard of costumes from both costuming groups and members of the general public alike was absolutely awesome, and the crowds were brilliantly natured. To my Facebook friends who are getting annoyed at the sheer number of photographs of me popping up in their newsfeed, I can only apologise - there were a LOT of photographs taken!

My favourite was the weekend is one I found in a vanity search on Flickr; the one at the top of this blog. There were some absolute beauties, but this one pipped them all.

I have some other exciting Dredd related news, but can't talk about it at the moment. Expect an update in about a month or so about this.
Spewed out by FoldsFive at Monday, July 09, 2012

I love comments. Love 'em. However, abusive or spam or Anonymous ones may well be sent straight to the bin. Thems the rules.

Blogs you must read